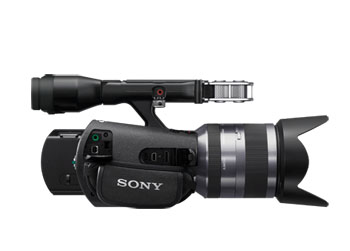 " The Sony NEX-VG20 Interchangeable Lens HD Camcorder is the updated, second generation of the large-sensor Handycam camcorder, featuring an even higher-resolution CMOS chip and new 24p & 60p recording modes at 1920 x 1080 resolution. Like its predecessor, the NEX-VG10, the VG20 has an APS-sized sensor and an E-mount for attaching Sony's growing family of compatible lenses, and so the camcorder enables the shallow depth of field for which DSLR video cameras are so highly prized. But the NEX-VG20 also succeeds where DSLRs fall short. Physically a camcorder, it's specifically designed for shooting motion video with ease and comfort. "

Our testing confirms that EditReady successfully converts Sony NEX-VG20 footage. This means that files from the Sony NEX-VG20 can be converted and transcoded, and played in applications like Quicktime Player, iMovie, Avid, and Final Cut Pro.

Our testing confirms that ClipWrap also successfully converts Sony NEX-VG20 AVCHD (mts) footage. This means that files from the Sony NEX-VG20 can be converted and transcoded, and played in applications like Quicktime Player, iMovie, Avid, and Final Cut Pro. If you're using a Mac running Mac OS X 10.6 or 10.7, ClipWrap is a great solution for working with these files. If you're on a newer Mac, we recommend using EditReady.

EditReady works great with the video files recorded by the Sony NEX-VG20. You can easily preview the files, edit their metadata, apply LUTs, and transcode them to formats like ProRes, DNxHD or H.264. It's the fastest and easiest way to get from capture to edit.