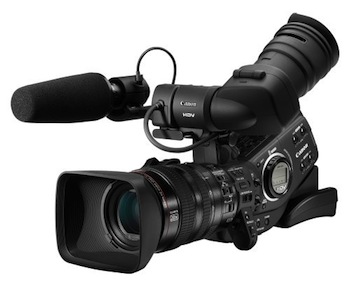 " The XL H1 HD camcorder offers a broad range of capabilities, emulating those of cameras that are significantly more expensive. They include the "Professional JackPack" which allows the user to send out an uncompressed HD signal (through the HD-SDI terminal), input and output SMPTE time code and receive a Genlock signal. Image capture through Genuine Canon optics, which rank among the very best in the world, interchangeable lenses and the "open architecture" of Canon's XL series of camcorders gives the XL H1 superb creative flexibility. "

Our testing confirms that EditReady successfully converts Canon XL-H1 footage. This means that files from the Canon XL-H1 can be converted and transcoded, and played in applications like Quicktime Player, iMovie, Avid, and Final Cut Pro.

Our testing confirms that ClipWrap also successfully converts Canon XL-H1 HDV (m2t) footage. This means that files from the Canon XL-H1 can be converted and transcoded, and played in applications like Quicktime Player, iMovie, Avid, and Final Cut Pro. If you're using a Mac running Mac OS X 10.6 or 10.7, ClipWrap is a great solution for working with these files. If you're on a newer Mac, we recommend using EditReady.

EditReady works great with the video files recorded by the Canon XL-H1. You can easily preview the files, edit their metadata, apply LUTs, and transcode them to formats like ProRes, DNxHD or H.264. It's the fastest and easiest way to get from capture to edit.