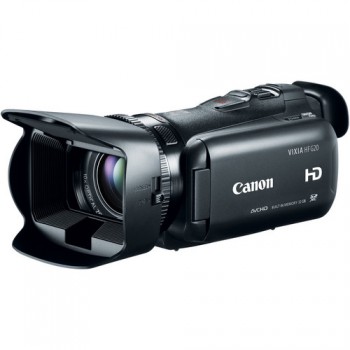 " The Canon 32GB VIXIA HF G20 Full HD Camcorder shoots 1920 x 1080 Full HD video at 60i, in native 24p and 30p. With the 24p frame rate option you can give your footage a cinematic look. Using Cinema-Looks Filters you can boost that film look with multiple built-in adjustable filters. The HF G20 features a Genuine Canon 10x HD Video Lens with an 8-Blade iris for more professional-looking video and stills. It has a 30.4 - 304mm (35mm equivalent) focal length. The camcorder is also equipped with a Canon HD CMOS Pro image sensor that supports improved low-light performance and a wide dynamic range. "

Our testing confirms that EditReady successfully converts Canon VIXIA HF G20 footage. This means that files from the Canon VIXIA HF G20 can be converted and transcoded, and played in applications like Quicktime Player, iMovie, Avid, and Final Cut Pro.

Our testing confirms that ClipWrap also successfully converts Canon VIXIA HF G20 AVCHD (mts) footage. This means that files from the Canon VIXIA HF G20 can be converted and transcoded, and played in applications like Quicktime Player, iMovie, Avid, and Final Cut Pro. If you're using a Mac running Mac OS X 10.6 or 10.7, ClipWrap is a great solution for working with these files. If you're on a newer Mac, we recommend using EditReady.

EditReady works great with the video files recorded by the Canon VIXIA HF G20. You can easily preview the files, edit their metadata, apply LUTs, and transcode them to formats like ProRes, DNxHD or H.264. It's the fastest and easiest way to get from capture to edit.